The week was pretty boring but we had a busy weekend. Oh I had a doctors appointment earlier in the week. "everything is good, measuring right on the due date blah blah blah". Seriously, this kid has outstayed her welcome. My brother arrives Tuesday morning so will being trying everything and anything to evict this kid after he's here to look after Auron.

On Saturday morning we had a bit of a big clean up and I got all the washing out of the way (I got my package of ridiculously cute cloth nappies this week that needed a good prewash). We headed over to to Aarahi's Aunty Jenny's for a yummy roast lunch. When there's no traffic she actually doesn't live all that far from us. Lunch was delicious, especially the mint sauce which I lathered on everything. She also has 2 dogs with Auron was in love with. It was his first doggy encounter so did really well and wasn't scared. He kept trying to lie down with them and copying them when they were poking their tounges out.

We returned home from lunch and I quickly iced our cake to take to the youth cake auction and then went for a quick 20min nap before we were off again. The youth at church are fundraising for a big youth camp/conference called EFY at the start of next year. One of the fundraising activies was a cake auction. All the youth and members of our ward and even some from other wards baked cakes and other goodies ready to be auctioned off. Everyone gathered in the hall holding their bidding paddles as bid like crazy til every last cake was gone. There were A LOT of cakes! The youth managed to raise over $3000 to go towards EFY. We scored some coconut buns and cupcakes. I actually wanted to buy my own cake back but someone else bet us to the maximum bid. Lucky for us they let us go halves with them!

Today Auron went to nursery for the first time. He seemed to like it. Our ward is still kind of new so definitely lacking nursery resources. There arn't very many kids who come regularly enough anyway. 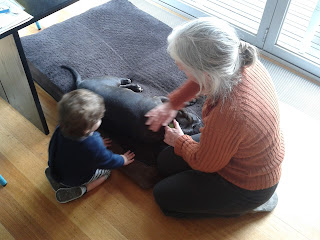 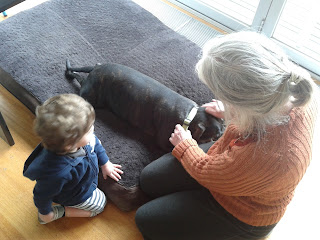 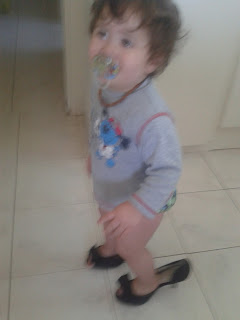