Back on Track (written 2 weeks ago almost)

I haven't written a post in a while seeing as I broken the charger to the laptop and have been too slack to go get a new one...really I just didn't want to have to pay the $100 for a new one, but we are now back up and running again.
Well lots to catch up on. First of all Aarahi's mum and brother Haroma came over for a week I was still in NZ when they arrived but that didn't matter. They were over for a wedding of one of the boys from back in Tauranga. Haroma was best man and Aarahi groomsman (which he only found out like 4 days before the wedding haha). They said the wedding was lovely, you can't really get much out of boys about weddings though other than what they had to eat.
Nanny Kaye was able to go visit with her sister who happens to live in Melbourne aswell while she was here which was nice for her I'm sure. As for the rest of the week they were here we were actually pretty boring, went to IKEA and Scienceworks one day. Science works was pretty fun, if you were like a 8 year old kid, especially a boy you would totally be in your element. We also went bowling one day, I don't bowl well at all and had a dismal score (I blame it on being pregnant) so I let Auron replace me on the second round he did pretty well with his little ramp thing and was only 1 behind Uncle Haroma at the end of the round. On the last day they were here I had well and truly exhausted myself and couldn't bring myself to do anything. Haroma went into the city to see one of his friends though. Later that night we dropped them off at the airport. It was sad to see them go, especially since we know we wont be getting back home for awhile now.
The whole next week I spent recovering from travelling and being so non-stop busy. Auron always takes a few days to get back to normal after a trip away. He has to come back to reality that he's not the centre of the universe and that if he wont eat his eat dinner there's no one who's going to let him eat grapes and chocolate pudding instead!
It was my birthday at some point in all of this, to which we nothing for. I didn't even bother getting out of my pj's all day. Although I did get some lovely bracelet charms and some yummy bubble bath.
The next week ...this past week was queens birthday weekend. For some reason its a week later here than in NZ. I was finally feeling up to leaving the house. We went to look around at the shopping centre where we want to move. While we were there we found Hog's Breath restaurant. We had really wanted to go there while we were living in Brisbane but couldn't afford to so we took the opportunity to have lunch there. IT WAS SO GOOD! Even Auron ate an entire kids meal, for some reason he screwed his nose up at the lunch I had packed him when he saw our food (to be fair it was a pretty unappetising packed lunch)
The rest of the week just went by as usual. This morning we headed back out the same way to go to an open house, it was a nice house but too small for us. There was another house in the same complex that was available too which is about 3 times bigger so will probably look into that. After we went back to the shopping centre did some shopping had some lunch and finally made it home. I am totally ready to go to bed now. 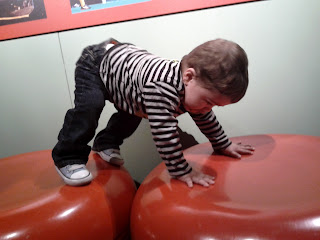 At the Science Museum, of all the cool things to do all he wanted to play on were the big red chairs 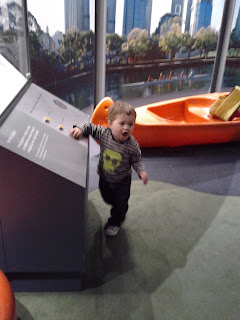 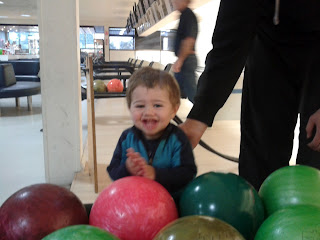 Ooooo so many pretty balls 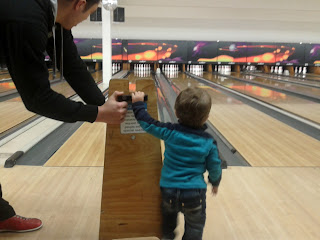 Daddy helped me line up my ramp just right 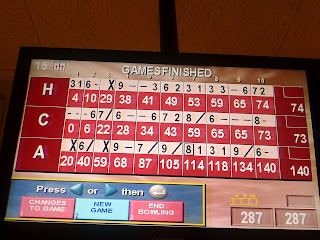 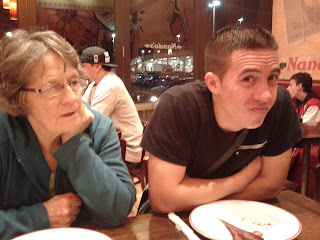 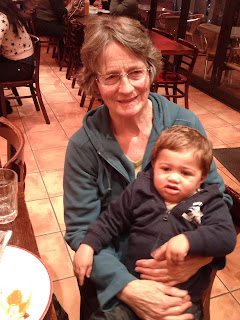 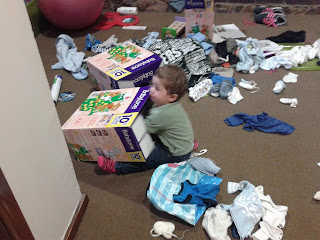 "helping" mama sort out clothes for the new baby
Posted by clin133 at 02:39 No comments: