On our last day in San Francisco we went and did a little shopping. It was a beautiful day...would've been perfect for sight seeing. Breakfast today was at a little place called Honey Honey. Tiny little place it was. Aarahi ordered for us today, on my instructions to buy the baby a fruit cup and yoghurt, he returrned with 2 MASSIVE pancakes with banana, cream and maple syrup. Auron was impressed and actually ate most of it.
We flew from San Francisco to Las Vegas to Salt Lake City. The view from the plane was incredible! We actually nearly missed our connecting flight in Las Vegas as we were an hour late.
In Salt lake we were met by Aarahi's cousins and Mum and Dad who arrived the day before us. For the past few days we have been staying with family and it has been GREAT! They are such amazing people and we have really enjoyed being there and getting to know them.  We had a little family reunion where Aarahi's dad taught some songs in Maori and taught the guys the haka. They did so well! and were all soooooo excited! One morning we went out to an all you can eat french toast and pancake restaurant for breakfast. The trick was on us though as we could barely get through one serve! not bad for $5 though.
We visited the Salt Lake temple and went to a session there which was an incredible experience it's such a beautiful place to be. We feel very privileged to have this opportunity, and especially to share it with family. I have always wanted to visit the Salt Lake Temple ever since i saw the movie Mountain of the Lord. I wondered to myself yesterday if this is what they imagined it would be like in the future?
After the temple we went to a Mexican restaurant called Red Iguana, all I can say is YUM!!!!!!!! The food was authentic, and the hosts lovely. From the outside it looks like a bit of a dump but it has a big reputation. We arrived at 430pm and only just got in (they dont take reservations) by the time we left the line outside was long and the wait appoximatly 2 hours! They made Auron a cake for his birthday too which was nice.
Today we had the opportunity to go to General Conference. It was so special to be able to see it live instead of on a wall in the chapel. The music sounded beautiful and the spirit was so strong. The others missed the afternoon session and said they would look after Auron so Aarahi and I were able to go together. That was probably the best part of our whole trip I think. 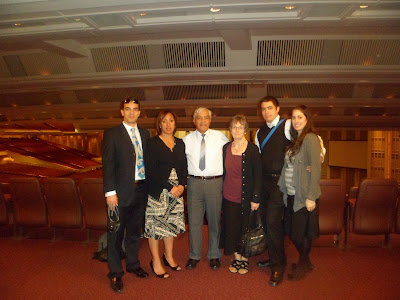 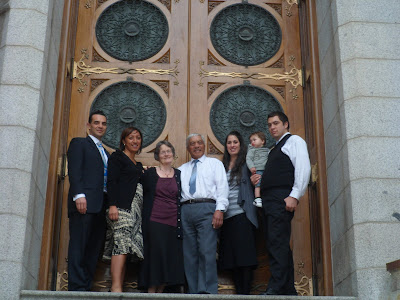 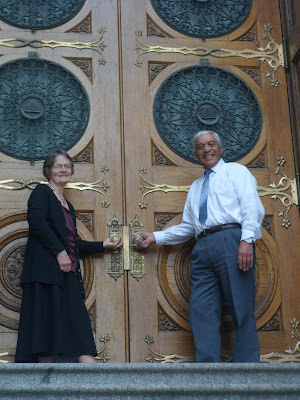 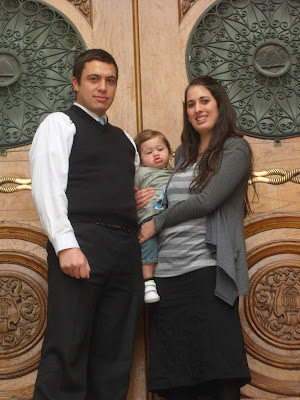 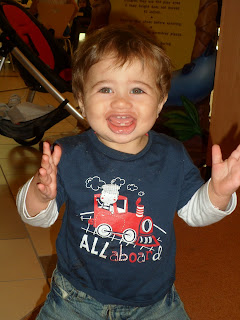 Well here starts our holiday! I hope you enjoy reading of our adventures!

Left home at 9am for our flight which left at midday for Sydney. Had awesome seats for that flight but changed planes in Sydney and our seats from there to San Francisco were CRAP there had been a mix up with the online seat allocation.
The flight was uneventful. Auron was fantastic didn't cry once, barely even heard a grumble out of him. The best part of the flight was these little bread rolls with luncheon sausage in them, reminded me of my mum. So yum!
Once we got to San francisco and collected our luggage, I realised they had broken our pram, still works but the one side of the shade cover has been broken off. Its a flipping expensive pram and only a few months old. The airline said its not their fault as it was a "moving part". I was tired and in no mood to argue. Insurance can deal with it later, for now it's held together with a hairtie.
Had a few issues finding our shuttle but FINALLY made it to our hotel. A quaint little thing right in the centre of the city. It's sort of an old European style hotel. So nice and cosy! We all needed a sleep! Aarahi woke up unwell, a bit of jet lag I suspect. He's come right now.
We just got back from eating at the cheesecake factory. We went a little overboard with ordering appetizers, mains and dessert. Now I realise why we just stick to mains and share a dessert if were lucky. One thing we did notice that was remarkably different to Australia and NZ was the service from the wait staff. They went totally out of their way to make sure you were taken care of, constantly filling up our drinks, checking that we were ok, getting Auron something special to eat for FREE! Maybe its just the norm here or maybe just our particular waiter but needless to say he received a nice tip.
On our walk home we could here some BEAUTIFUL music playing in the street at 9pm on a Monday night. This old guy was playing a clarinet sounded amazing. We chucked him some money a listened for a bit.
Now the night is drawing to an end and my Darling and I are going to sit in bed watch TV and eat our cheesecake!

Today we headed down to Fishermans Wharf and Pier 39. Before we got there we stopped at this little cafe for breakfast. I had read that it had really good reviews. Once we got there for at 1130...for breakfast it was completly full and we had to put our name on a waiting list. We waited about 20mins beofore we were seated. The food was reasonably priced and HUGE portions for what you paid. Everything was homemade even down to the hashbrowns.
At Fishermans' wharf we visited the Ripley's believe It or Not Museum and the Mirror Maze. Both were fun, and worth the money. A lot of the museum was interactive too which was fun, those museums where you just look and admire can get boring. The mirror maze was just plain confusing. I scared myself a few times, and quite frequently I went to walk to Aarahi and ended up walking into the wall.
We went for a stroll around Pier 39 which has some pretty cool shops, all aimed at tourists.We weren't  planning on buying anything, but it soon became necessary as the rain started to pour and the temperature plumeted. We purchased an unbrella and a warmer jersey for Auron.
Despite the pathetic weather we went on a boat cruise around the San Francisco Bay. As it was pouring with rain and so cold Aarahi was delegated to take the photos out on the deck. Auron and I watched the action from the warmth of inside, next to the heater!. It was a pretty cool tour. We saw the Golden Gate bridge, Alcatraz and lots of sea lion, some were swimming in the water but most were relaxing on barges near the shore.
So with staurated feet...literally sloshing around in water by this time we decided it was about time we both got some new shoes. Back in the city we went on the hunt. 90mins of shopping later we were no longer leaving puddles of water behind us as we walked.
Dinner tonight was pretty lame not worth much of a mention. we ate at the food court, I decided I really just wanted some vege's but not much luck there. 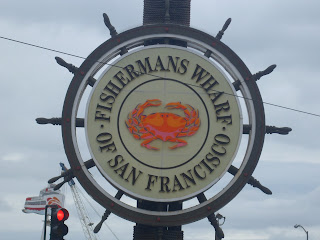 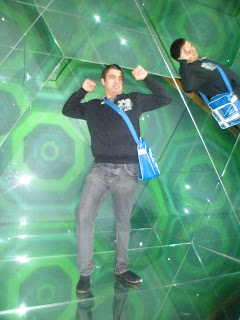 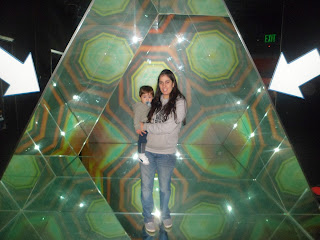 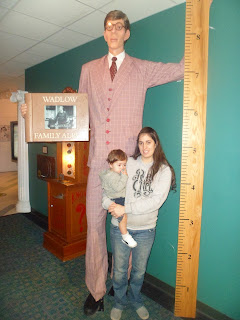 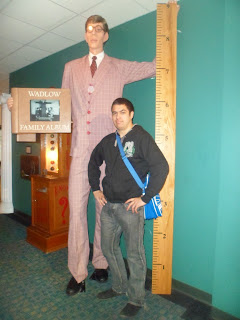 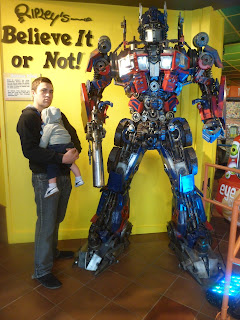 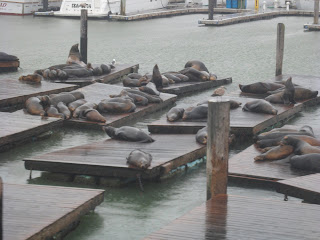 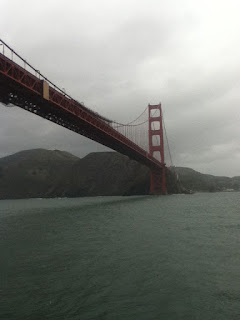 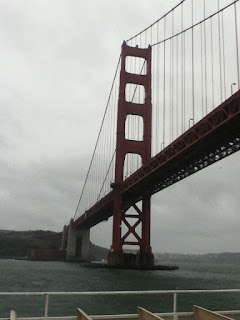 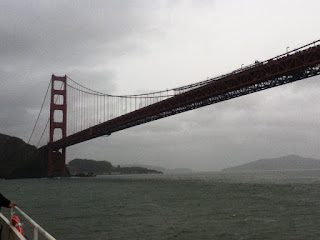 Yesterday we had a little party for Auron's first birthday which is this coming Friday. Aarahi and I made him a cute Hungry Caterpillar cake which actually didn't turn out too bad! It was a LONG day though. Aarahi and his young men were doing a service project tending to the garden at family's home he arrived home not long before the party was due to start. Luckily we had done a lot of the prepartions the night before. Auron himself had been a little poo during the night so was to exhausted the next morning that he put himself done for a 3 hour nap....I guess there's a silver lining to every cloud, as I managed to get a lot accomplished without having to worry about him.
My friend Kim and her partner Chris turned up. Kim helped me finish of lunch prep while Chris entertained Auron in the lounge with the 60 or so balloons we had blown up for him. My Aunt uncle and cousins arrived not long after and we settled in for a a relaxing afternoon of burgers party food and cake.
Auron was blessed with some cool presents too, although he was quite taken by the $1.50 plastic snack boxes.
Cousin Ra and his girlfriend Nicolette arrived for dinner and to catch up. The three boys (Aarahi, Chris and Ra) got down to business with the xbox while us girls did the usual girl stuff. By 930pm that night everyone had gone and it was definitely time for BED! Auron was so well behaved and LOVED the attention he was getting.
In other news, earlier this week Auron went to have his immunisations and he didn't even cry!!!!!! Such a brave boy he was. Daddy even said he was braver than him. Following that we went to KFC for dinner. It was good. I only like the burgers though. 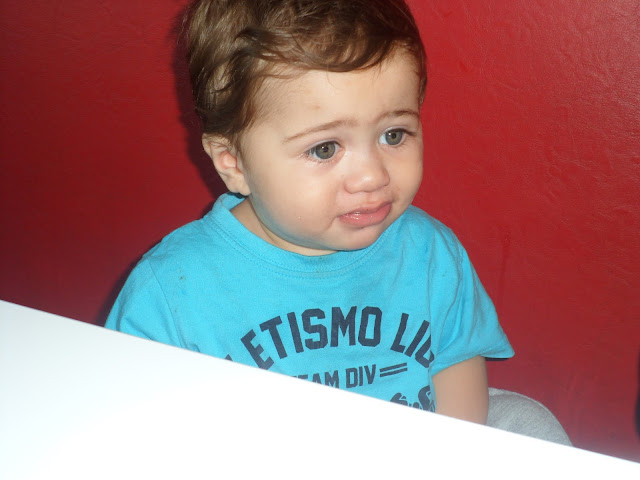 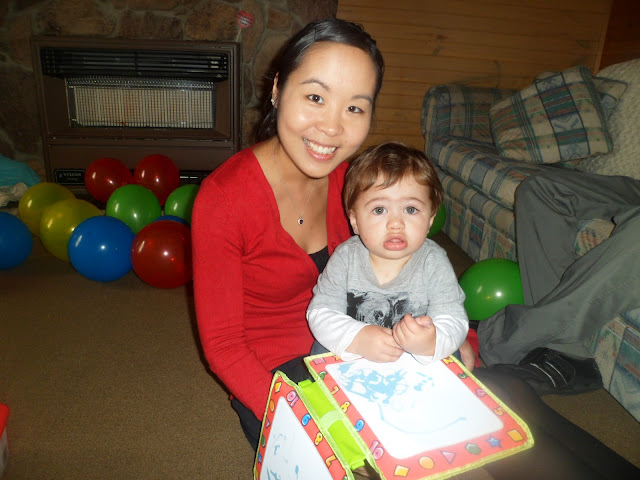 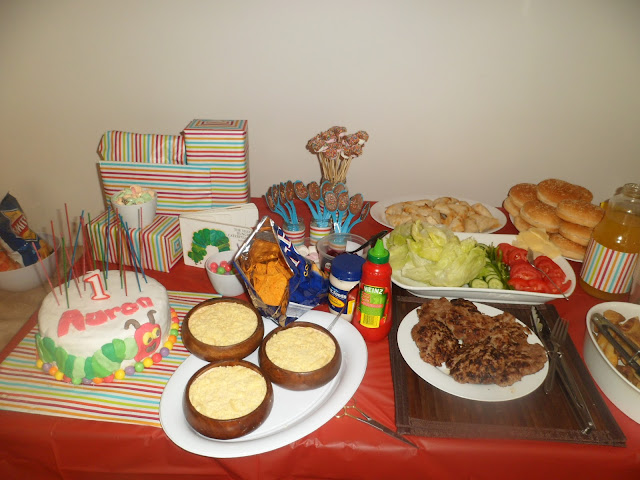 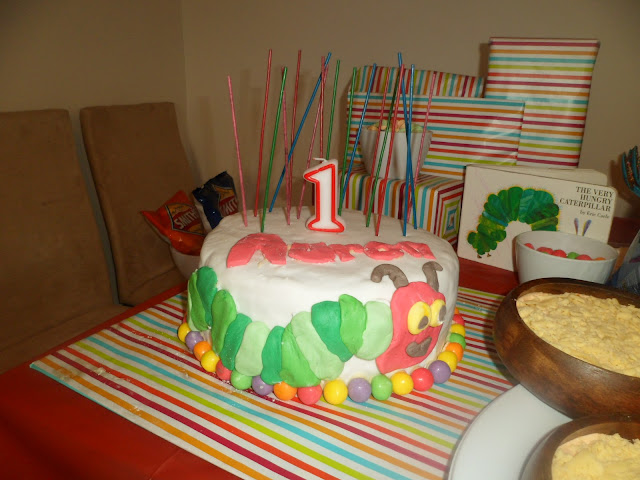 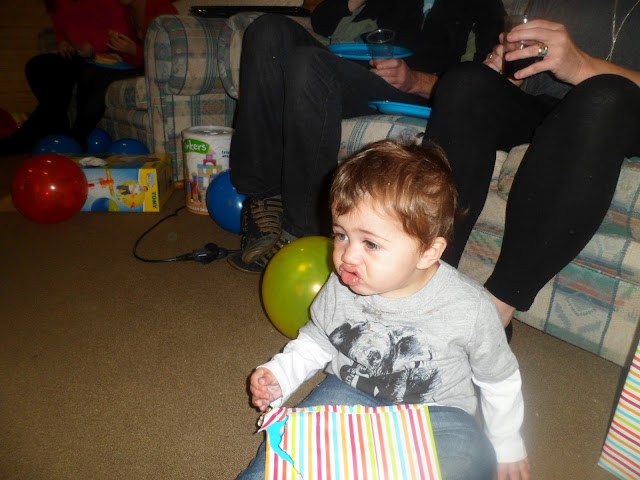 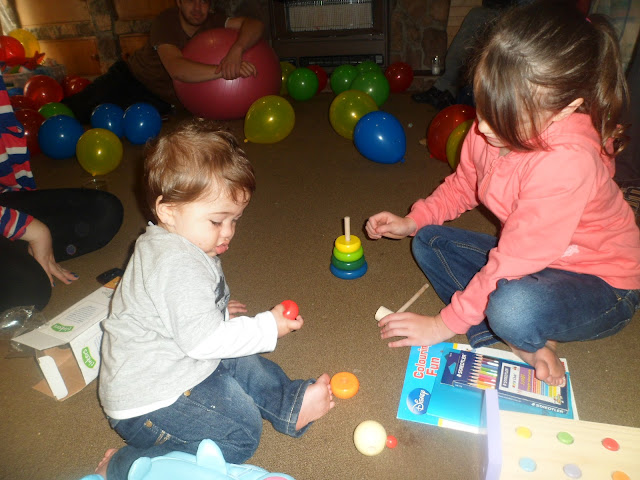 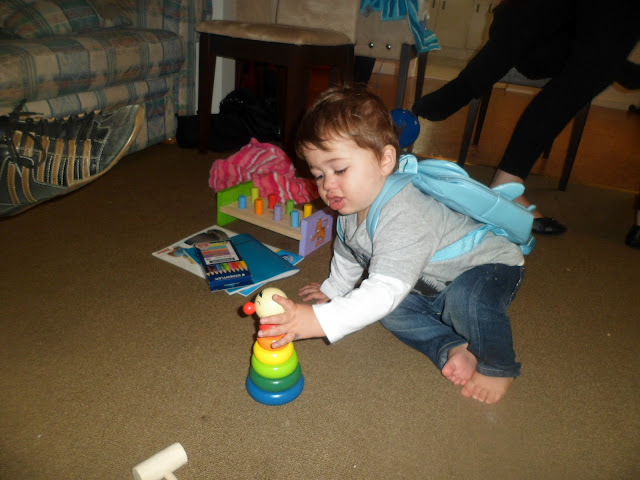 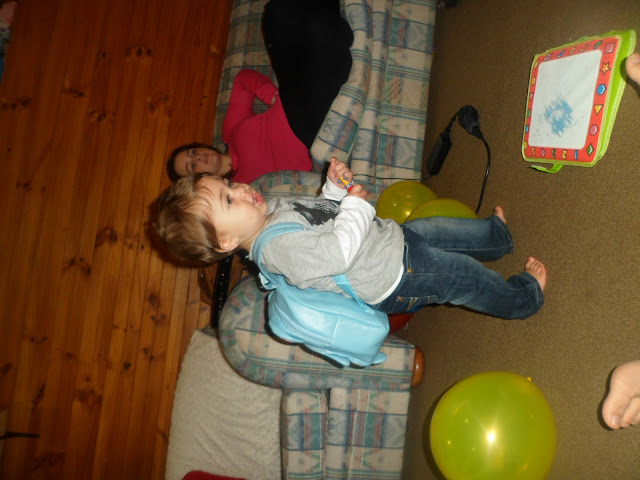 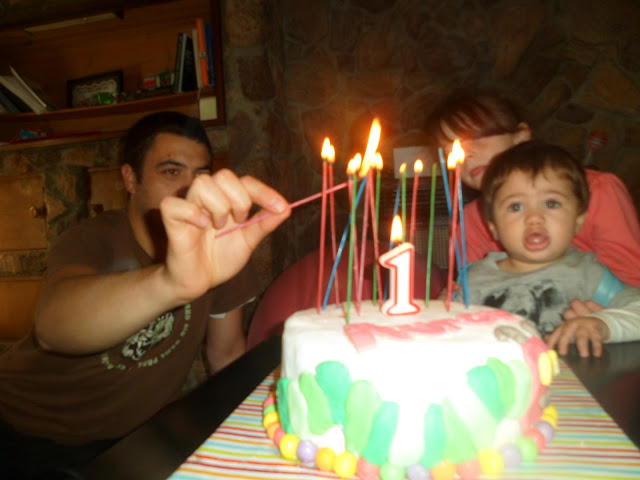 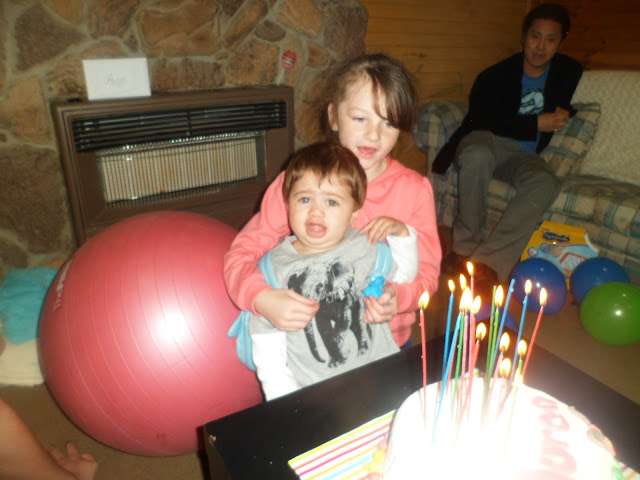