Can I feed myself now?

This week Auron has taken a liking to feeding himself. He's not too bad at it but definatly needs some more practice. This week we will be working on feeding ourselves. He's pretty good eating things with a small fork but using a spoon is another story.
On Saturday we went to a missionary homecoming for Elder Lemalu. He served in our home ward in NZ but he's actually from our ward here in Australia. It was a really nice night, lots of food, lots of people, and some really good company. Aarahi caught up with two guys he grew up with in Tauranga which was a nice surprise.
We've had the grossest weather this past week. So bad infact that I had a HUGE pile of washing sitting in the laundry for almost a whole week. Finally we were blessed with ONE nice day and managed EIGHT loads of washing. I think it was pretty much all the clothes and towels in our house! In hindsight I should have just gone to the laundry mat and put them in the dryer. 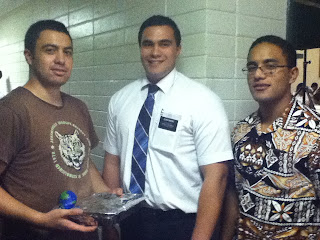 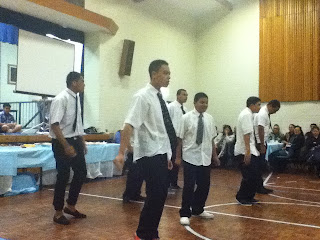