Ughhhh I hate hot weather! We are lucky that our house doesn't get too hot it's still gross and sticky and hard to sleep. But now its pouring with rain and stormy as anything, hopefully that cools everything down.
Yesterday Auron managed to pull my hair straighter off the shelf and turn it on and subsequently burnt himself. I didn't realise how bad it was until later that night. He barely even cried but as I looked at his fingers I noticed to big blisters. Poor baby. He doesn't seem at all bothered by them though so we are lucky there. Such a tough little man we have.
Auron has his little routine in the morning. He wakes up and sits there for a minute then he's off down the hallway to the bathroom to play in the bottom of the shower. He plays there for a good 20-30mins then he's back to get me to make his breakfast. I think its just so cute that he does it EVERY morning. He also loves to talk on the phone. He uses the the actual phone, the remote, wii controller and DVD's and holds it up an babbles away to himself.
On the weekend we went to my cousins 7th birthday. They have a cool blow up pool which all the kids loved, it was a 40 degree day so it was well used all day. Auron loved it, it was a nice chance to cool down. He also loved the raspberry iceblock and bottle of juice his cousin Tiarne gave him. He definatly is a spoilt little boy. Earlier that morning we went to clean the chapel at 6am. Auron followed Aarahi around outside with his little lion bike.
Now that Aarahi has Sunday afternoons free, because he no longer teaches mission prep it gives him the chance to be able to participate in the choir which he has been wanting to do ever since we moved here. He loves to sing....and he CAN sing but he hasn't had many opportunities for awhile now. 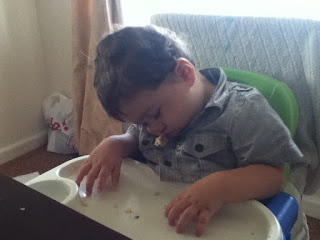 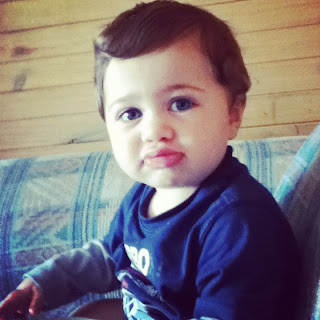 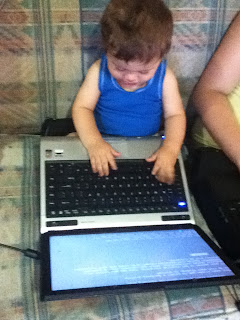