Yup only 1 week 6 days til were coming home! (Aarahi gets annoyed and says I should just say 2 weeks so it seems like it comes faster)

It was Aarahi's birthday on Monday...it was a disaster so we rescheduled it for Saturday to make up for  it. He got some/lots of chocolate, a cake and the box set of Pirates of the Caribbean, which we haven't watched yet because our DVD player has suddenly stopped working. I also made him whatever he wanted to eat for breakfast lunch and dinner.

Aarahi's passport came this week aswell which is a relief. They had sent back his application form because he hadn't signed it. They said that once we sent it back it would take atleast 2 weeks for it to be processed and have the passport sent out to us. This would have ended up being only 2 days before we were due to fly out, but it turned up the day after I sent off the signed form. Blessings or what! Speaking of blessings I went to pay our power bill this week and realised once I got to the post office that our power company had given us a $400 credit for being loyal customers for ONE whole year. That's like 6 months FREE power!

On Thursday Auron and I went to the city to go see Anita (we stayed with her family in Brisbane). She was playing in the National High Schools Volleyball Tournament. Her team did really well and it was really awesome to be able to go and see her play. I almost didn't recognise her! On our way there we took the wrong train and got a bit lost on the way home.

I went a picked up some material and other things from Spotlight to make Auron some of his Christmas presents and to make some things for our Christmas dinner we are having here with my Aunt Uncle and Cousins next week. So it's been a bit of a busy sewing week, not so easy when Auron wants to "help". 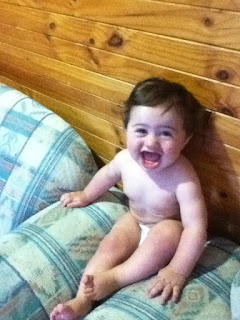 This little Pukeko is a climber, he climbs on everything! He climbed up on the couch and then over it. Here he is having a break in the middle. He's also figured out how to climb out of bed (our bed). The other day he got out of bed before I woke up and wandered off down the hallway to get up to some mischief. I found him playing in his room pulling all his clothes off the shelves. 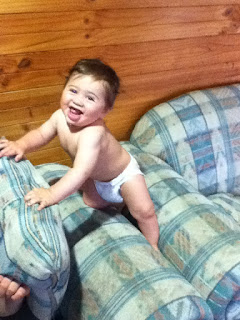 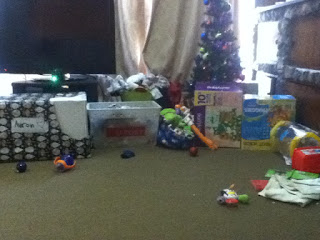 These are Aarahi's attempts to baby-proof the TV and Christmas tree. A wall of nappy boxes washing baskets and toys 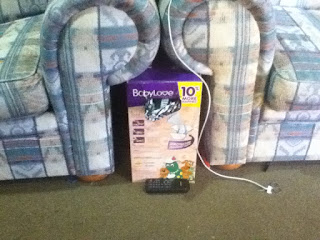 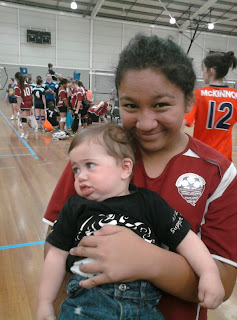 Anita and Auron at the Volleyball
Posted by clin133 at 18:07