Another week has been and gone, I swear the days seem to be going in reverse or something. I dont remember being this impatient when I was pregnant with Auron (my dear Husband may tell you otherwise though). I'm actually feeling pretty good considering. The sore back is about half as sore as it used to be, my main issue now is sheer exhaustion. I'm lucky Auron is a consistent napper who will sleep 2-3 hours in the afternoon which means I'm hanging out til 1130am when I can put him down and have my nap too.

Aarahi took Monday and Tuesday off work I thought he was just having time off because he felt like it, turns out he was actually sick. I felt somewhat guilty when I realised since I dragged him out to get craft supplies and baby stuff. He's feeling much better now, I think I need to remind him to have a nap when he gets home from work though so he doesn't exhaust himself. (he usually works 3am-1.30pm or there about)

Auron and I have been doing lots of cooking together lately. It's the easiest way to keep him out of trouble while I'm making dinner. He loves it though as soon as he sees me get out a pot or bowl he's over quick smart dragging a chair behind him. His 'helping' is often counter productive but he seems so proud as he throws onion skins into the pot. I got him to mash up the avocado the other day which he did pretty well. After all this cooking though im left with a pig sty of a kitchen and filthy chairs. I think i might have to find a "cooking" chair that doesn't matter how much it gets dirty.

I had another Auron free day at church as he was stuck to daddy. Aarahi had to take some of his Young Men up to the hospital to give the sacrament to someone so took Auron a long for the ride. They got back just as church finished.

This afternoon Aarahi was asleep in our room so Auron and I watched a bit of sesame street, I dont think we even got 10mins in before we had both crashed on the couch.


A couple of photos of Auron doing his "cooking" 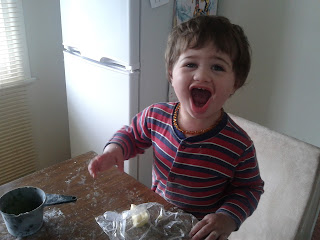 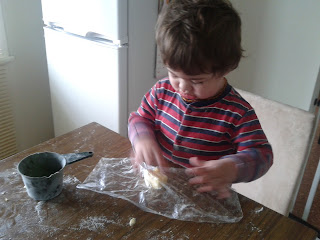