A bit of jealousy?

Auron has been pretty good with having  a new baby around the house...EXCEPT when it comes to the bouncer. He hates seeing Liliana-Mei in it, tries to pull her out, pull her blankie of her, even to the point where he hit her in head with the remote (she wasn't too phased by being hit in the head). When little baby isn't in the bouncer Auron jumps in and curls up with his blankie (he does look pretty cute). It's slightly annoying though as the bouncer is Liliana's favourite place to be, just like when Auron was a baby. 9 times out of 10 she would rather be in the bouncer than being held.

Along with the adjustments around here Auron has been having bed issues. He screams the house down at night when he goes to bed. No amount of cuddles, books, bottles etc will calm him down. I had Aarahi put him to bed last night instead and he went fine so maybe it's just me, so we will keep with Aarahi doing night time bed for Auron. He did wake up last night crying, I brought him into bed with us, but he was being a pain in the butt jumping around which soon turned to crying. Went and got the laptop so he could maybe fall asleep watching sesame street...no such luck. 5 hours later he fell asleep, then right on cue Liliana woke up to bed fed. So all in all it was a lame night. Although I was really pleased with how Liliana slept, in her own bed with out making all her normal annoying noises which make it hard for me to sleep.

Auron got a haircut yesterday, he wasn't impressed at all. He was ok to start with but started to cry after a couple of minutes, since it was already half done we had to finish. Not even chocolate would console him.

Our lovely relief society sisters at church have organised to cook us dinner for the next two weeks. It's been so nice not to have to think about cooking, and then having to worry about cleaning up etc when all I really want to do is be lazy and go to bed and SLEEP, plus trying to cook with Auron is near impossible. Last night for example I made some treats for us to have while we watched a movie. Auron "helped" but made a huge mess of baking soda mixed with grapes and popcorn.

Hmmm I have been thinking today about how much I LOVE not being pregnant. I can now:

- sleep on my stomach
- after a week fit into my pre-pregnant jeans, and now 3 weeks later comfortably fit them
- sleep all night without visiting the bathroom
- tie my own shoe laces
- pick up auron again
- and many many other things too! 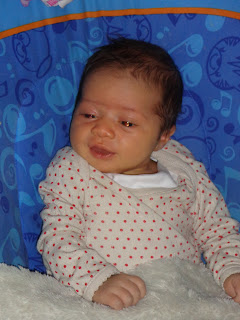