We spent our weekend curled up in the lounge watching DVD's and being really lazy. Lili and I were both sick which meant Lili's sleeping has gone out the window, I have had probably 3-4 hours sleep in the last few days. I cleaned the house at 3am this morning while Lili played. It tired her out and she went back to sleep then Aarahi got up for work, then Auron woke up and our day starts again...actually it feels like the days NEVER END! Today is looking up though, Lili went down for her normal nap (first time in a week). I'm pretty sure she's just gone through a growth spurt. I bought her new onesies last month 6-12 month size and she is already almost too big crazy right? she is really tall.
Our bank account took a bit of a hit this week. We paid for insurance, car registration (which is ridiculously expensive here), flights back to NZ oh and a months worth of rent. I don't think I have ever spent so much money in one go! And all on dumb things...well a holiday isn't dumb but the rest are haha.
I was planning on going back to NZ for the weekend in July, to have a girls weekend up in Auckland, mum was coming up which is good. But now its going to end up being more like a month, not complaining about that! Although I will miss my husband terribly! Aarahi will join us August for a week to spend up at his parents in Tauranga. I think this will be a much more relaxing trip for him.
We don't mind coming back to NZ so much but sometimes it would be nice to go other places. We knew when we moved to Australia that we would have to make many many trips back to NZ for our kids. So that they would know where they came from, and develop a good relationship with their grandparents, aunties, uncles cousins etc. Haha and as much as people say "oh it doesn't cost that much to fly between Aussie and NZ" it's not exactly true. For us it usually costs at least $5-6k each time we fly over. But it's all worth it. We are excited for July. Auron is starting to recognise people now in photos. So far he knows who Lia and Teina and Khyber are and my mum.
The other day at church there was little boy that looks quite similar to Khyber and Auron just attached himslef to him. He followed him around until we went home. He kept calling him Khyber it was too cute.
We are having playgroup at our house tomorrow morning with the kids from church. It should be fun. I will have to make some more playdough this afternoon since Auron put the old stuff into the washing machine...and turned it on. Did I tell you my 2 year old can do the laundry?! yup that's right. I was hanging out the washing last week and when I was finished I went back to the laundry and the washing machine was on again. Auron had put a new load on, he even put the soap powder into the right part (and the right amount) and then turned it on.
Yesterday it was a little too quiet so I went to look for Auron. He was sitting on the toilet with the ipad (Aarahi's influence there) I said to him "come on bubba let's go" he then proceeded to wipe his bum..with his nappy still on then flushed the toilet and put his pants back on.
Lili is becoming quite attached to Auron this past week. He has been playing with her quite a bit and now she cries is he leaves the room with out her. Sometimes he pulls her by her feet to go with him but she kept getting a sore head on the tiles so I showed him how to put her on a blankie and pull her on that. Yesterday he was spraying her in the face with water which she loved haha strange child. 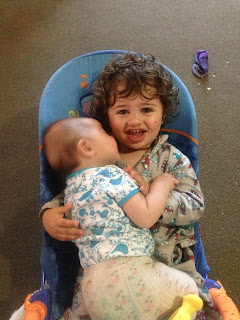