NZ Trip - The First Half

So our holiday has been and gone. It was amazing, but now we are exhausted tired and sick. Poor Auron was beyond happy to get back home. I know he found it harder this time around, so many new faces and places and no time alone with Mummy and Daddy and his routine thrown into chaos. Our next trip to NZ is planned for next January when my friend Ashleigh gets married. Lili coped pretty well she has never had a routine so never had to adjust really.

Right now onto the trip. We flew out on Tuesday the 5th March. Auron got sick with a tummy bug at the airport so we ran out of nappies before we even got on the plane, ended up having to squeeze him into one of Liliana's. Upgraded a few hours before we left as it was pretty cost efficient since we had so much excess luggage we would have had to pay for anyway. What was nice about upgrading was that we didn't have to wait in any lines, got a whole row of seats to ourselves so plenty of room to spread out, our bags came out first and we got to use the Air NZ lounge facilities. The lounge was a huge blessing for us as the one in Melbourne had a good kids area and plenty of food and drinks. It was really really really nice not to have to chase Auron around the airport making sure he wasn't getting into mischief.
We arrived at midnight and collected our rental car and headed to Shane and Teri's. We chatted for awhile then we went to sleep around 2am. SO TIRED. The next morning we were off to Tauranga as soon as the kids and Teri were off to school and work.
Teh day we arrived in Tauranga was Aarahi's Dad's birthday so we celebrated with a yummy roast pork and steamed pudding. Dad managed to dig around in the freezer to find Aarahi some feijoas which he guarded with his life the rest of our trip. There was no way anyone was going to be allowed to share those with him.
We went to swim with the dophins while we were there. The first trip was a disaster with the weather turning pretty tragic it was so unbelievably rough. We went back a second time and found a huge group of around 150! unfortunatly we couldnt get right in to the water as there were lots of little babies. But you could sit onthe edge of the boat, hang your legs over and the dolphins would jump up and hit your feet, pretty amazing.
We had left Lili and Auron with Aunty Kristen the first day, Lili refused to take a bottle despite me spending a whole month getting her used to it but when it came to the day she didn't come through. I guess it just shows that neither of us are ready to be apart just yet. I didn't cope that well either. So the next day she came out on the boat too.
On Thursday we went and had dinner and a swim down at the beach. Auron freaked out about the sand on his feet and the water chasing him, he ended up loving it though. Auron also really enjoyed his cousins especially Lia. He learnt 3 peoples names while we were away, Lia, Teina and Khyber. I guess they were his favourites haha. He still wont say mum so I obviously don't compare to them! 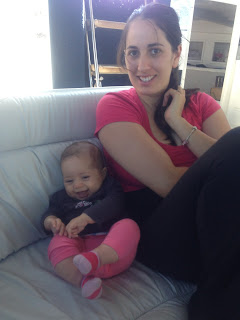 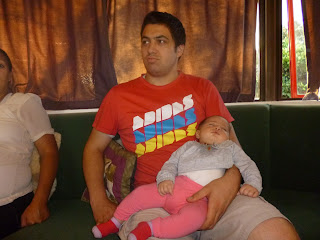 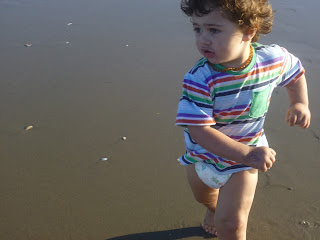 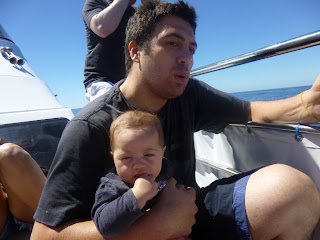 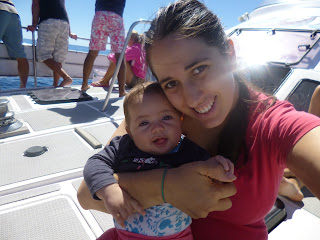 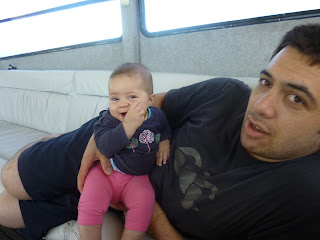