It's about time he became useful

This week Auron has become very proficient at doing the dishes. For this whole week the only thing I have washed is the big pots and the sharp knives. Aarahi's response was "about time he became useful" haha considering the about of mess he manages to make every day this is a nice treat for me. I feel like all I do is clean all day everyday. But back to Aurons dishes, I stack them up nicely for him and he spends maybe an hour washing them and then stacking them up nicely on the other side ready for me to dry them but he doesn't like me to dry them until he has finished.
Auron is also very good at making his own breakfast in the morning once I get his bowl and cup down for him. He can put cereal and milk in his bowl with out spilling it everywhere and then pour him self a cup of milk and carry it over to the table.
We are planning to homeschool our children. It is something I have felt strongly about even before I actually had kids. The last couple of weeks I have been preparing stuff to start a preschool program for Auron once we get home from holiday. It will only be 3 days a week and largely play based. It's more to to get us into the routine and to take advantage of these early years when he is just like a sponge. We are also working hard on Auron's talking at the moment. He doesn't have many words that he uses although we have noticed in the last 2 weeks that he's added to his list. His receptive language is great but his verbal language is a bit lacking. He just seems to like to talk in his "own:" language. Like he will carry on a conversation with you but I have no idea what he's saying!
Lili is doing good, being as cute as ever, I wish she would sleep longer at night between waking but I can't have it all. She hardly ever cries, unless she rolls on to her tummy and cant get back over. The ladies at play group think she is the best baby because I can just lay her on the mat on her blanket and she just falls asleep even with all the other kids poking her and running around making crazy amounts of noise. I must admit she is really easy to put to sleep. She loves Auron especially when he is in the mood to play with her!

Well Auron has finished the dishes and gotten himself some peaches for morning tea so I guess thats my cue to go dry and put the dishes away. 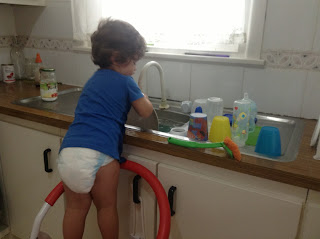 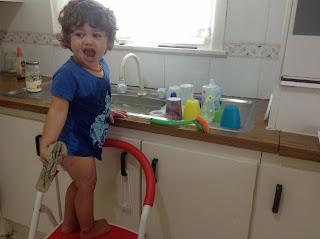 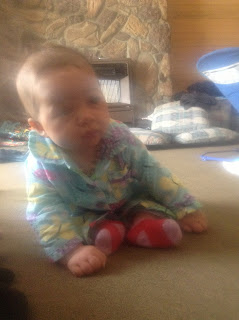 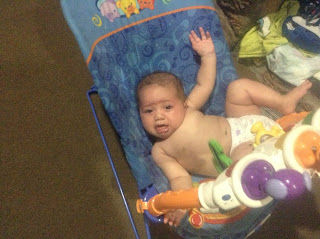