We are what we eat

A few weeks ago I was readying my brother in laws blog, which you can read here. In it he describes how its often the little things that can motivate us to change our lives for the better and live a healthier life. There is such an issue in this day and age with obesity and increasing health problems, especially in young people. But why are we suprised? Our lives have become so busy and and hectic it's easy to forgo the healthy meal and settle for takeaways a few nights a week, or rip open a box of pre packaged food because we are just too time poor.
As we did our weekly groceries this week I noticed the absurd amount of pre-packaged food crawling the shelves. If you take the time to look on the back of these convenient little boxes at the ingredients you will notice that much of the product is made up of numbers...additives preservative colourings and all sorts of other nasties. I have often bought them, as i'm sure everyone else has. I had a slight addiction to cheap homebrand juice, with so many numbers you would think it were a math problem. My new drug of choice is Charlies pure orange and mango juice no numbers at all.
My mum taught me that if you can make it easily you should. Growing up we didn't eat too much premade stuff. Things were made fresh. As kids we were required to cook. I was able to prepare dinner for a large family from the age of 10, my younger brother who is 11 can cook a meal and has been able to for many years. A year or so ago when he was accidently left home alone (long story) he invited all the neighbourhood kids over and cooked up a big meal of bacon, eggs, pancakes and all the extras and clean up after himself. We have also had the disasters when it comes to meals too the epic fail of a dish made by my brother Wane which he will never live down. In his attempt to make spaghetti he put EVERYTHING into one pot and boiled away. Yup in went the dry pasta, the water for the pasta, raw meat, pasta sauce, cheese, onions and some veges. It was revolting to say the least. He's a pretty good cook now though.
So back to the point of my story, teach your kids to cook you don't have to be the soldier or super mum or dad. Even a 5 year old can help in a significant way, it doesn't have to be a 5 star meal every nights but make it fresh avoid those packages laden with numbers! And what a gift to give to your kids, the ability to cook, and healthy eating habits. AND watch out for all those numbers in your food.

So on to the rest of our week.... Yesterday was our wedding anniversary. We spent the morning at the temple together. It was pure bliss. The afternoon was spent watching DVD's together and eating some yummy treats. Then we went out for dinner which was a nice end to a wonderful day. I love being married.

Auron has moved into his own room into his own single bed. He likes it better than his cot and sleeps much better in it. Which is nice for EVERYONE. The better sleeps make him a much more plesent baby to be around during the day, not that he was ever bad but he did get grumpy sometimes and cry now not so much. 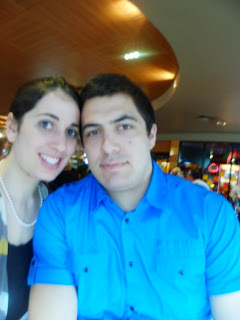 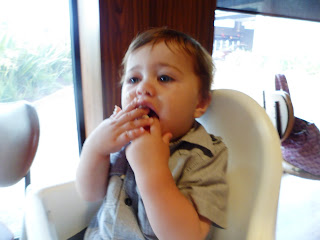 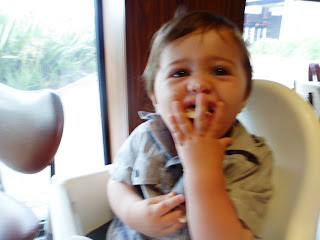