So after a lovely week in Palmy Auron and I headed up to Auckland to family number two! I'm pretty lucky being blessed with two families.
Our time in Auckland was pretty relaxed compared to Palmy. Each of the kids had a day off school so would have some time to spend together. We went out to lunch at a place called 'the wok 'n' noodle' think its a pretty cool name for a restaurant. It was really good too, so if your in Auckland you should definitely go.
My sister Ellie lives up in Auckland now and invited me and some of the other ex-palmy girls over for dinner. We had so much fun catching up together, some of the girls I haven't seen in years. My sister is also pregnant and due a couple of months before me. Her little boy is also just a few months younger than Auron (we tend to reproduce at the same time in this family it seems)
On Thursday Aarahi's brother and Mum were up in Auckland to fly out to Melbourne for a wedding Aarahi and Haroma were groomsmen at. Aroha and I went and met them while they waited for their flight. Aroha was meant to road trip down to Palmy with me for Haroma's homecoming but ended up not being able to at the last minute so was good that she got to see him then. After we said goodbye we headed into Parnell to have a hot chocolate at the Chocolate boutique....yup good stuff everyone should go there.
On Friday Ahila-mei and Khyber had the day off school so we headed out to the Zoo. It was AWESOME they have just done it up and added all new NZ exhibits which were pretty spectacular. The eels were a tad gross though.
The main event of the week was Khybers baptism on the Saturday. Teri and I cooked up a small storm in the morning, yummy finger food. I got to speak on Faith and baptism, I was determined not to cry and did so well! I did get a little shaky but held it together. Te Arai was able to baptise his little brother which was pretty special, then he started to bawl his eyes out and my attempts at not crying all fell to pieces. Later that night I headed out to the night markets with Tearai and Emily which was fun. Unfortunately being pregnant prevented me from eating lots of the yummy food there!
Finally Sunday came and our holiday drew to a close and we headed back to the airport to get on yet another plane....SO SICK OF PLANES! Auron did awesome yet again. We were so happy to be home with Aarahi again! 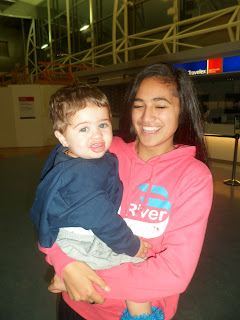