A day in the Life

I should have known today wasn't going to be a "normal" Thursday when I woke up this morning and looked at my phone. It was 7.45am! I haven't slept that long in who knows how long!!!!!!!!! what was even stranger was that I was the only one awake. I sat in bed checking facebook, emails, other random things. The kinds woke up just after 8am and the chaos began.

Today probably wasn't the day to sleep in. We need to be at Gymbaroo by 945am and it takes us about 30mins to actually get there. So I shoved some breakfast in us all. Lili spent a good time throwing herself on the ground complaining about the hard life she has as a spoilt little princess.

Kids dressed. Finally get Auron to wear a different pair of pants. He has become obsessed with this red pair of shorts he was given last week. I get in the shower for probably the quickest shower known to man. While getting dressed in the room Lili climbs into the shower, she emerges wet as a fish. Change her again.
Yey finally out the door. The kids argue over who gets to sit where in the pram Auron wins.

Gymbaroo goes off without a hitch.

We walk accross the road to the shopping centre. Auron sees the new Despicable Me movie. He thinks he's in heaven, doing a little dance and everything. I let him put it in the trolley and then disappear it later on. (he's getting it for Christmas) He also tries to convince me to buy him some cars, he suceeds.

I stood at the check out holding  screaming baby while the check out lady took her time ringing up my stuff. She came to the last item and it wouldnt scan, typical right. She then had to ring to find out the code. 10mins later I was questioning whether those shorts we really worth it (they were, theyre super adorable)

Aarahi arrives and we go to do the groceries. Lili was consoled with one of Aurons new cars. (the purple one, not the green one he tryed to give her) While shopping Lili began to lose the plot again so we tried to get out of there as fast as we could. The card machines were down so we had to sign for our cards. Oops I hadn't even signed the back of my card yet.

We came home Lili slept, Auron and I did some sewing. Lili woke up and threw the pins around the room. Hopefully I got them all....I put the load of washing that's been sitting in the washing machine on again for the 3rd time. There's also 2 loads out on the clothes line. It keeps raining and I cant be bothered bringing it in just to go hang it out again. I figure it will eventually get dry but for now its just getting a real good rinse.

Oh how I can't wait til 730pm when the kids are alseep and I can sit down and watch some mindless tv. Despite all it's craziness I wouldn't change it for anything. This is the life I have always wanted and I LOVE it!!!!!!!!!!!!!!1\ 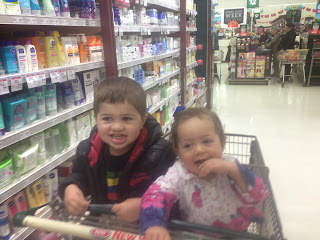