In April/May this year we thought "hey let's do a girl's weekend". It was one of those thoughts my cousin and I have for great plans that never come to fruition. We are often quite elaborate in our plans then we just end up eating chocolate and nothing ever happens. Please tell me we aren't the only ones???

This time however, we actually made it work. My mum flew over from New Zealand for the week and we headed out of the city for a night away. We had it well planned out, I paid accommodation, Sotarah paid for petrol and driving and Mum paid for the cheese...I mean food.

Our whole plan for the weekend was to do NOTHING. So we arrived just after lunch and after finally figuring out how to turn on some kind of heating we settled down to do our nothing. We are soooo not good at doing nothing. It was like twiddling our thumbs kind of boring.

To cure the boredom we huddled back into Sotarah's "good little car" and hot up Kmart. No one can ever be bored in Kmart. I purchase some swimwear...for the first time in 6 years. The last set of swimwear I owned was a bikini. Haha I wouldn't want to torture the world with that image these days. It seemed so wrong to be buying swimwear while a storm brewed outside. It's still technically August so why is there swimwear out anyway??!

We had Fish n Chips for dinner. Nothing better than fresh fish direct from a seaside town.The had the batter just right, crispy not soggy. Probably the best I have had in Australia. They say they do good Fish n Chips but they have nothing on New Zealand.

We spent the next morning at the Peninsula Hot Springs. As soon as we walked into the reception area we knew it was going to be a very new kind of experience. Everyone was so calm and serene. They gave us a card on rules to look over....no sex in the pools. I guess that sort of stuff happens often?? Then they handed us over our crisp white robes, Now we were fully initiated into the commune. A commune that was exactly what it felt like. We probably spent a good 3 hours soaking up the lovely hot mineral water before we were getting hungry and not prepared to pay the inflated prices to eat some rabbit food they had at the cafe.

We stopped of on the way home at Mc Donalds, see a much better alternative to rabbit food. Although I went to the bathroom after lunch and was looking at the advert on the back of the stall door for crispy raw organic green beans. I was sold, however when I went to buy them they were sold out due to weather conditions. Saved myself $5 and purchased an entire bag at Aldi that afternoon instead. I doubt they were organic. 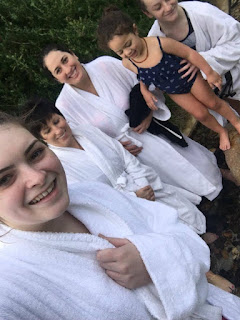