When you meet someone as a couple they often ask "Oh so how did you meet?" My lovely husband often rolls his eyes at this question. He doesn't like to tell it, but he thinks I give a somewhat one sided story. He admits he couldn't tell it better because well it's the TRUTH. So now let me take you back to September 2009.

Ok maybe a little earlier than that. In the January Aarahi had returned home from his 2 year mission for our church. He served in Brisbane Australia. Most of Aarahi's siblings and their families live in my hometown and I have known then most of my life. His little brother and sister in law were some of my good friends. I spent a good deal of time and his older sisters house each week, but I never really knew Aarahi.
After his return certain family member of both his family and mine began suggesting that we date. I laughed it off. He lived in a different city, and the one time I had talked to him I thought he was arrogant which actually couldn't be further from the truth. But deep down I knew I was going to marry him. I can't explain it, I just knew. He knew too. A fact we have only really shared with each other since we have been married. We were both kind of dating other people.
In September of 09 Aarahi moved from his home in Tauranga down to Palmerston North to live with one of his sisters and "sort out his life" Because it was uni holidays and Aarahi didn't have a job yet we spent a fair amount of time together, a long with our friends.
One night we were having a xbox night (incredibly boring). The others were playing, Aarahi moved a little closer. I was starting to freak out a bit, so I prayed "heavenly father if this is who I'm supposed to marry you need to make really obvious" I swear not even 10 secs later he had his arms completely around me. I felt calm and perfectly happy. For anyone who knows me, I did not people touching me so this was a big thing. The night went on and the boys went home and for the rest of the night until 6am Nadia and I analysed his every move that he had made, you know as girls do. We even went to wake Tamara up to get her take on things but she was useless in her zombied state.
The next few days were kind of awkward with a few more of those kind of moments. We talked and said we needed to make it clear to the other people we had been dating that it was really really over. With that done we started to date. It was a blissful 6 days.
We went to church on the Sunday fasted and prayed. Aarahi had a rather intense interview/interrogation/meeting with my "other father" (my father died in the January). Later that night Aarahi asked if I would marry him, I said yes but told him that, I expected a proper proposal with a ring and down on one knee.
And a proposal I got. On Christmas day he handed me a box of chocolates with a riddle in it. He had made a treasure hunt for me! Once I had collected all the clues it spelt out "will you marry me?"Then he sung to me...which my mother interrupted because she was annoyed people had turned off the music, and when everyone yelled at her to be quiet she proceeded to give a lecture about how it was her house and she can do whatever she wants. LOVE IT. He got down on one knee and put the ring on.
Yup that's it! we were married 3 weeks later a year to the day Aarahi
Ok that was a shortened down (edited...) version.

I have been blessed with the most wonderful husband for me. He is more than I have ever dreamed of. I never doubted my decision to say yes to marrying him after only 6 days of dating. I'm sure people thought we were crazy/irresponsible/and many other things but no one said anything to our face but I don't doubt it was said behind our backs haha! Hey now that we look back we often say to each other "oh my gosh we were crazy" but once who know you know I guess. 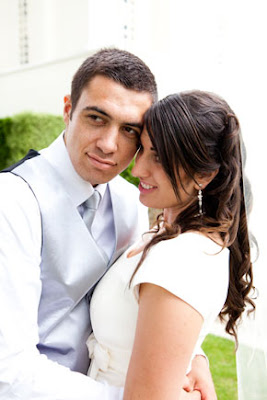