I thought I would show you what we have been up to this week with our preschool. We took a few weeks off while we all recovered from being sick. At the moment we are doing preschool 2 days a week.

Our preschool starts once Lili is down for her nap at 10 am. To get into the quite calm mood for learning we start with reading some books. Auron is becoming more interested in books,especially at playgroup. He would never sit and listen at story time, instead he would go play with the toy kitchen or on the bikes outside. Now he will stay for the majority of the story. He's still not keen on singing time, and watch out if you even think of doing ACTIONS to a song. Crazy kid. We're working on it.

After reading we usually get out the puzzles or other activity. Auron got some cool puzzles from his cousins for his birthday this year which are probably his favourite. We practice our counting, with the puzzle pieces. He can count but it doesn't really sound like numbers but he has the same word for the numbers each time, so I guess it makes sense to him.

We usually work on our colours, with the blocks, and do a bit more counting. Sometimes we practice our writing, at the moment it is just drawing lines and circles. I will move on to forming actual letters once we have mastered the line and circles.

Auron is behind in his speech. He's not really far behind but is barely on the lower end of "normal" for his ages. To help his speech come along we have been doing flash cards. Auron will only say the word once he knows he can say it properly. We often spend ages trying to teach him something which he will never say but then he will come out with something completely random. At the moment everything is "nice" I didn't think we even used that word so often. Chris and Kim were over last week and they said they have noticed a huge improvement in his speech since they saw him last, which was over a month ago. It's nice to see we are making some progress.

I try to pick a fun craft or play activity for us to do. I alternate between crafts and something more physical. This week we have done paper mache and "golf" well a version of golf.

Depending on the time Auron will either get out something from his play cupboard like playdough or drawing or he will go have a nap.

All up this takes about 2 hours. Lili usually wakes up about half way though and is happy to join in with our fun as well. Hopefully tomorrow I will have time to post about fun activities you can do with babies! 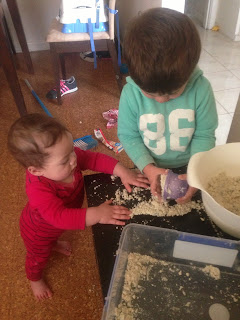 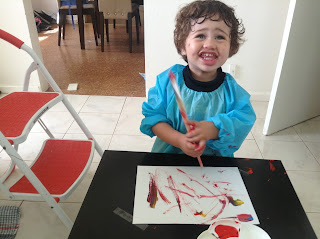