Today I stood at the pantry wondering what we could do today that would be new and exciting. Nothing came to me so I moved on to making breakfast. Later in the day, after Auron had flooded the kitchen and threw a tantrum when I pulled the plug out of the sink putting an end to his fun, I thought back to my time in Kindy/kinder/preschool whatever you like to call it. My FAVOURITE activity was outside in the messy play troughs. In one of the super long troughs was a mixture of cornflour and water. I swear they must've had to use boxes upon boxes of cornflour to make enough to fill it up.
Today we made a scaled down version. I wasn't sure how Auron would like it, he's weird about what he does and doesn't like. Lili on the other hand is always keen for a bit of mess!

How you do it

Some cool things about this slime:

If you mix it really slow the spoon moves through easily

If you try and mix it really fast it's almost impossible!

If you pour some on a hard surface it acts like a solid, pick it up and it turns into liquid. 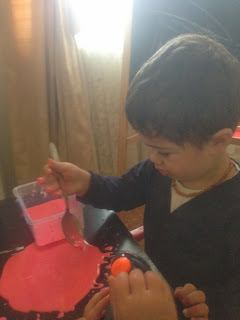 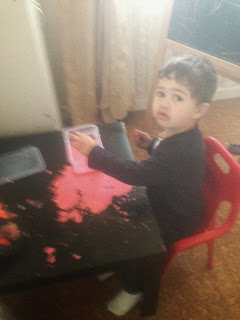 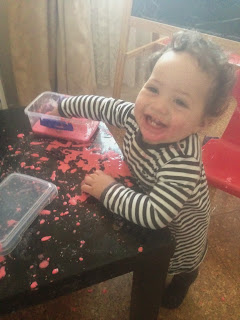