Ok people I think I may have just found the BEST play dough recipe ever! We make play dough fairly regularly in our house with the usual flour and salt recipe cooked in the stovetop. It's good but I was feeling the need for a change.
The last time I made playdough was when I was back home last month. My the 2 year olds played well with it loved it and made a huge mess, as you would expect from 2 year olds. My 10 year old sister on the other hand was caught eating it. Her excuse "I didn't know that was going to happen!" The time i made it before that Auron put it in the washing machine then turned it on. You can imagine how that turned out. I am still finding bits of red playdough in my washer despite it being months ago and after multiple cleanings!

Ok so on to this wonderful recipe! It's gluten free if that matters to anyone. The original recipe came from HERE but I adjusted it a little to make do with what I had.

Combine all ingredients in a saucepan and mix together until well combined and smooth
Place on a medium heat and stir continuously until a ball is formed
Removed from heat and allow to cool until it is cool enough to handle
Knead the dough a little before giving it to the kids.

I swear this is the softest most silkiest playdough you will ever ever make! Auron must have thought it was a bit like pasta dough because he got out the pasta machine and is having a blast making blue pasta! Lili on the other hand did what you would expect most 10month olds to do (not 10 year olds) she tried to eat it, and was not please with how it tasted at all! 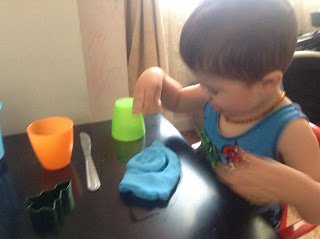 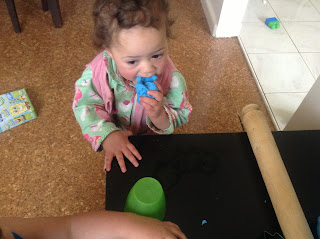 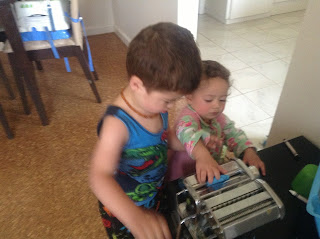 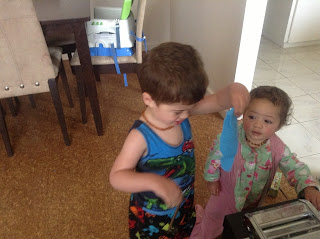